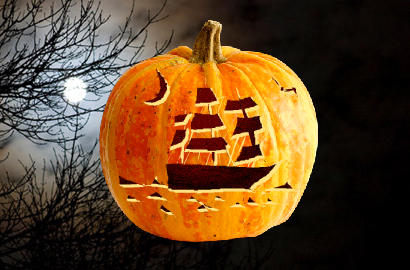 Did you know that Cutty Sark’s name derives from the famous poem ‘Tam O’ Shanter’ by Robert Burns?
There is an old Scottish legend about a farmer called Tam O’Shanter who is chased by a scantily-clad witch ‘Nannie’, dressed only in a ‘cutty sark’an archaic Scottish name for a short nightdress. This legend was turned into a poem by Robert Burns. The character of Nannie in the poem is depicted as the figurehead which adorns Cutty Sark’s bow.
Jock Willis, the original owner of the ship, chose the name Cutty Sark, which was allegedly suggested to him by the ship’s designer, Hercules Linton. It is a rather peculiar name for a ship, as in legend, witches are unable to cross water.
Jock Willis was a well-read man who enjoyed poetry. During his time as a ship’s captain, he would read French novels in his cabin. He also named one of his other ships the Hallowe’en, the title of another Burns poem. Although “Cutty Sark” was a little unusual, it certainly suits a sleek, swift tea clipper, giving her an air of magic and mystery.
Watch the video of the story. Support us on Indiegogo! Happy Halloween everybody!